Something, something, plausible excuse for vanishing

I wasn't really sure what to title this one. Hell, I wasn't really even sure what to write for this one. I've been all over the place lately, done a lot of soul searching, and had even more injuries. I thought about titling this entry "Running on injury," but realized that calling what I've been doing for the past couple of months 'running' is akin to calling my bacon grease fried bacon breakfasts "food fit for human consumption."

Stay with me for a moment and lets pretend this is a WB television show, and that I am an impossibly attractive twenty-something surrounded by other impossibly attractive people and somehow we rarely ever have to go to our jobs unless it suits our purposes for a cutscene or to forward the plot.  Got that? Great, now that we're there, lets do a flashback and change my haircut or something so it seems legit.

We're at a track, its the second to last event of the Summer of Miles race series building up to the Sir Walter Miler track event in Raleigh, North Carolina. Having had some knee issues I've come, cheered on, and taken pictures of some of the other events, but hadn't jumped in myself. I've decided that last race before the "championship" race will be the one I partake in.
The day is overcast, and the weather is humid, like a blanket made out of a disgusting combination of your grandmother's smothering love and your older brother's body sweat. I warm up with a couple laps around the track, keeping my eye on everyone else doing the same and occasionally speeding up or slowing down to catch individuals for a few meters of friendly conversation. The camera zooms into my left knee as I round the track for my last warm up lap, lingering there long enough for even the most addicted teenager to tear their eyes away from the tiny, emoji filled screen in their hands to notice the over-the-top foreshadowing. The scene cuts to my face. We see a the tiniest squint of the eyes, and a face perplexed, but meant to look as though its in deep thought. I am clearly wondering if knee, which feels fine at the moment, will be okay for a sprint race.

I lined up with around fifteen or twenty other people, not expecting much, but honestly hoping for a decent time. I went mid pack figuring at worst that I could get out of the way of those faster than me instead of burning energy maneuvering around others runners who might be a bit slower than what I was shooting for. Heart beating a little harder than it should for a fun race, I noticed that I was more nervous than I previously would have allowed myself to admit.

Coming around the corner and shooting down the straightaway we're one lap down and so far I feel good. I'm not exerting a ton of energy, I've moved ahead of a few other runners and to the inside lane, with no noticeable knee pain. I check the standing clock off to the left; we seem to drift by it in slow motion. Its digital, red glare tells me I'm just a bit faster than I wanted to be, but well within a safe zone and at low risk of blowing up and trotting to the finish with my lungs feeling like a wrung out sponge. I decide that I can bring up the speed just a few notches to see how I feel for the second lap.

I am 100 meters in, roughly a quarter of the track, and I spy a familiar hair bob leading the top three or four runners. Its Anne from my favorite local running store, Runologie. I set my sights on her as a target, wondering if I can catch up. I slowly shift gears and perhaps as a defense mechanism against the impending pain that comes with running faster, my mind begins to drift. Huh...that scoreboard over there is kind of old, wonder if they're going to replace it soon? Its a nice night out, wonder if anyone else is going out after this. Are penguins jealous that other birds can fly? Be hashtag grateful penguins, you can swim.

We hit the turn and came around the track again, just a few yards from a half mile. A friend waiting for the next heat cheered on Anne, now just a few seconds in front of me, and then told me I looked good in quick succession as I came up behind her. I formulated a plan as I slid in line with other runners. Stay behind her and draft as much as possible for lap three and then entering the fourth lap, fire and all cylinders and blow my lungs out and my legs up to try and get the best time possible.

Maybe it was my mind drifting, perhaps I wasn't paying attention to my footfalls and the pressure they exerted on my knee.  Maybe it was my friend throwing out a positive quip and the universe just wasn't having that. Maybe karma decided that me aiming to pick off the number one girl in the race wasn't cool. Maybe none of that had anything to do with it.

While I'm sure there's lots of medical science backing up what happened next, theres no doubt in my mind that Karma decided at least a little salt should be poured into the wound given the timing and location. We glided forward, one foot in front of the other, our knees moving up, forward, and down and around in a circular fashion to propel us to the starting point and at that moment, directly in front of the stands where the crowds sat and stood by the fence. Just a few feet shy of the mechanical clock ticking its electronic seconds away, my left foot planted on the ground and the suddenly everything that was supposed to be between the ball and socket joint of my knee vanished and I was left with bone grinding into bone.

I audibly yelped, hoping that no one noticed or heard me doing my best impression of a chihuahua being stepped on and knew something had gone very wrong. In the micro seconds that passed I felt like I was a crossing a canyon of time. I weighed my current options and thought that maybe I could back down, slow down, and finish with a respectable time. After all, it was only a half mile more, right? Two more steps. That clearly wasn't happening. A few more steps. Maybe I can power walk-ish the remainder? One more step. Nope. I was sure at this point at least some of my knee was being reduced to powder thanks to the grinding that was happening internally.

I hobbled over to the side, visibly frustrated and took my hat off to angrily swat it against the side of my leg. I sucked in a massive amount of air and blew it out of my lungs as I watched the last of the runners come through to start the second half of their mile. I looked over to the standing and cheering spectators and was relieved to see that no one appeared to be looking at me. Head down, I slunk back over to the start line with shortened, careful steps.

I wasn't sure what had happened yet, or what I had done exactly, but I did know that I wanted to speak with the race director and let him know that I hadn't dropped simply because I wasn't happy with my time, or any other my-ego-can't-handle-this type of reason. After the first heat had finished and while the set up for the second was happening I explained my situation to the RD. He laughed it off, and told me that I was better at taking pictures anyway. Having my conscience clear of any misunderstanding, I limped over to grab my camera and get some shots of the next heat, and the upcoming relay races.

Later, I found out that I had (once again) torn my meniscus, but this time in my opposite knee as from a few years prior. On the bright side I discovered that it was only a partial meniscal tear and *should* heal up with time and absolutely no exercise or motion that puts any strain on it. Having been active most of my life, and indeed most circles of friends revolving around different forms of exercise, taking the time off and doing NOTHING has been not only hard, but in all honesty, mildly depressing.

After a week or two of realizing just how much I despised both pool running and rehab biking I decided to throw myself back into the world of running one way or the other and started taking photography a little more serious and getting some pictures of local runners doing their thing. I discovered that if I couldn't be part of that community directly, I was okay with being a picture-taking groupie and enjoying exactly the same amount of beer with everyone post fact.

Its been a few months since then and while I didn't have any idea of what I was doing, and have definitely grown to the point where I am 100% aware  that I still don't have much idea of what I am doing, I found some solace in being able find a way to jump back into, and be part of the community while maybe even giving back a little bit. I guess what I'm trying to say here is that injury will forever and always suck, and its going to happen to most, if not all of us at some point along the way. The running community isn't going to leave you behind or out, but while you're injured theres no reason to completely succumb to the suck. If you're like me, you might have a hard time dealing with the fact that you're injured and can't or at the very least, shouldn't, be running. There are other avenues in to keep you occupied, you just might have to be a bit creative, and if you're lucky, find something along the way that you enjoy (almost) as much.

As for me, hopefully I'm over the hump of long hiatuses between blog entries and back on the road to recovery for the Fall race season! In the meantime, if you've made it this far I appreciate the time you've used reading this, even if it was only obstinately to kill time while in the bathroom. If you've got any tips for recovery, or rebuilding my base, I'm all about it! Share away in a comment, and thanks for reading! 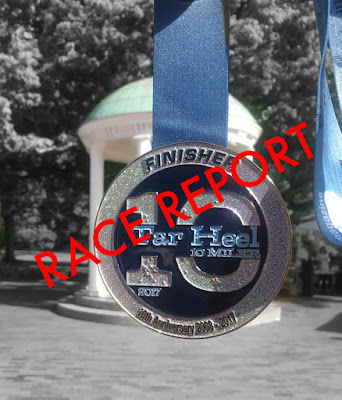